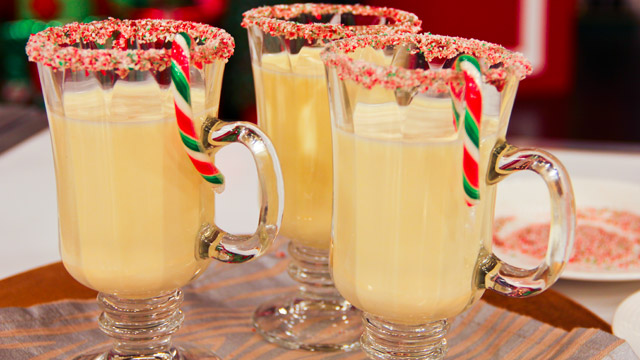 Drinking eggnog is a Christmas tradition in many countries because of its warming effect in cold weather.  It is just as delicious served chilled!  Eggnog, also known as milk punch, is a rich, sweet, creamy dairy-based drink traditionally made with milk and/or cream, sugar, and eggs with the addition of brandy, rum or bourbon.  It is served with a sprinkling of ground cinnamon or freshly grated nutmeg.  The word “nog” is said to stem from the word “noggin”, a small, carved wooden mug that was used to serve alcohol years ago.

According to food historian and Babson College professor Frederick Douglass Opie “eggnog most likely evolved from British aristocracy. While the lower class couldn’t afford fresh milk and eggs, the wealthy would at times drink their warm milk and egg beverage seasoned with pricey spices, such as ground nutmeg and cinnamon and add pricey liquors, such as brandy and sherry, to prevent spoilage“.

Be sure to try my “Top-deck” Chocolate Mousse to utilize the egg whites!