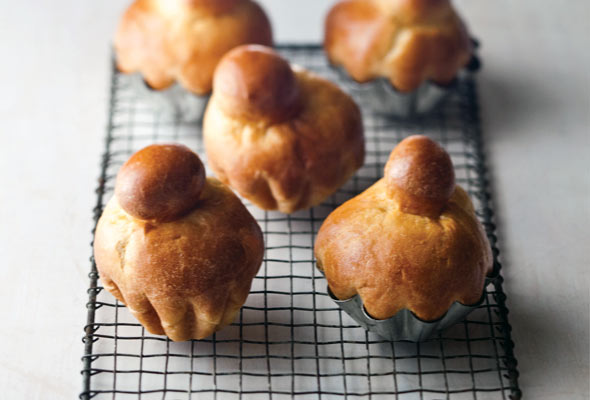 Brioche is a French pastry and is made in the same basic way as bread, but the dough is as rich as a pastry because of the extra addition of eggs, butter, liquid (milk, water, cream, and, sometimes, brandy) and occasionally a bit of sugar.  Brioche is often baked with fruit or chocolate chips and served as a pastry or as the basis of a dessert.  It is ideal for making French Toast due to its dense texture.

The dough can be baked in any loaf pan, but the classic Brioche shape is achieved by using special fluted brioche moulds or a big Brioche mould (see images below).  The traditional shape of a brioche is that of a round lump topped with another smaller round lump or topknot (hence its original name, meaning “with a head”), though it can be baked in regular loaf or muffin tins with great success.  Both the large and individual brioche moulds (pictured below) can be used for a variety of different recipes, for instance my Orange, Almond and Polenta Cake (see picture below).

Notes
The dough can also be baked in a 12-hole muffin pan or a large brioche mould.